Europe is bustling with ecommerce platforms, some of which are open source and feature a myriad of free tools and nifty customization options. However, some of the more popular ones provide basic features and are designed to address the needs of smaller businesses that can’t yet afford the luxury of bringing a developer on board.

The rising strength of electronic commerce and industry innovation steadily fuel growth in electronic payment volumes in Europe. In order to gain a better grasp of industry dynamics, prior to our analysis covering ecommerce-platform market share, let’s take a swift look at the general state of e-tail in Europe.

An Overview of the European Ecommerce Sector

The most recent stats covering internet penetration in the EU show that 79% of Europeans use the internet at least once a week, with 71% going online every day. This level of internet adoption and rising levels of trust in electronic payment methods have led the way to a steady, healthy evolution of the ecommerce sector.

Total European ecommerce turnover increased by 15% to €530 billion in 2016, although prognoses initially had placed that figure below €510 billion. The numbers are not in yet, but, in 2017, the European B2C ecommerce turnover has been forecasted to reach €602 billion, at a growth rate of nearly 14%. Since the previous year’s forecast has missed the mark by more than €20 billion, it is relatively safe to assume that the €602 billion projection is rather conservatory.

Main trends identified in Ecommerce Europe’s European B2C Ecommerce Country Report 2017 show that the proportion of website-owning companies is growing – from 67% of retail companies in 2010 to 77% in 2016. However, only 18% sell through their websites.

Who Are the Europeans Who Shop most Online?

The aforementioned report shows that the UK tops the list of leading ecommerce markets, accounting for approximately 33% of all European online sales. Within mature ecommerce markets, the proportion of consumers shopping online is genuinely high: 87% in the UK, 84% in Denmark, and 82% in Germany for 2016. At the other end of the spectrum, the share of people shopping online is the lowest in Romania, Macedonia, and Bulgaria. 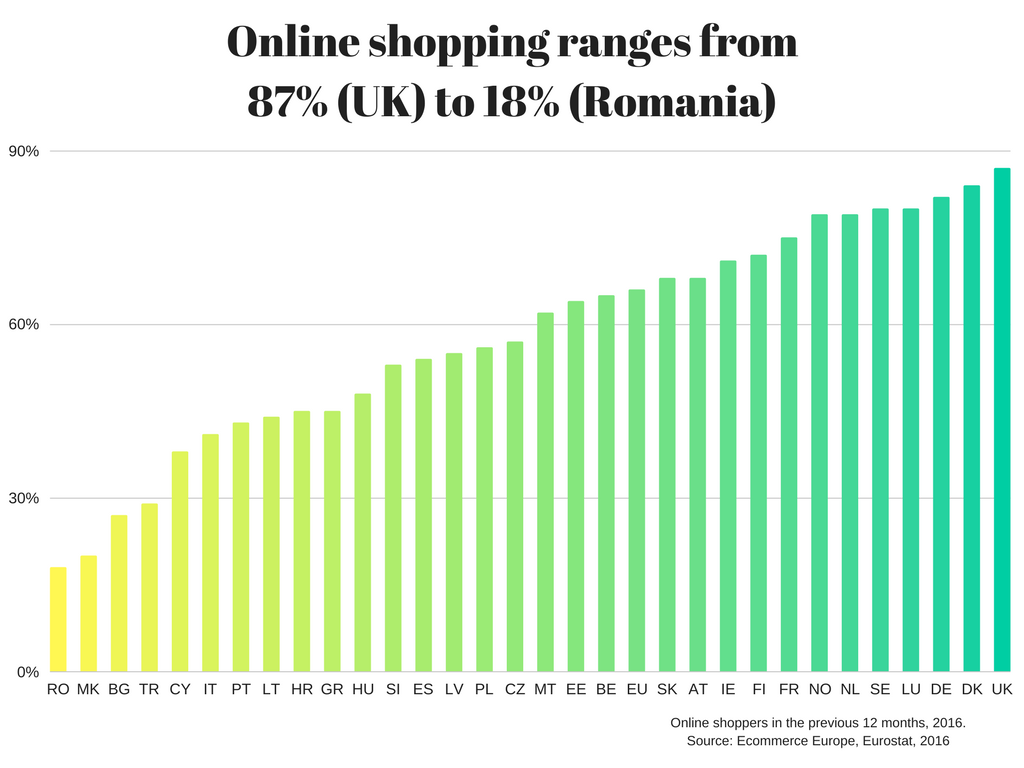 Even so, Central and Eastern European Countries logged the highest ecommerce sales growth in 2016. In Romania, sales increased by 38%, and the markets in Slovakia and Estonia grew by 35%, Ukraine saw a growth of 31%, while Poland and Bulgaria grew by 25%.

Cross-Border Sales in Europe Are on the Rise

Ecommerce-platform technology, combined with the EU Single Market, is an opportunity to sell and shop across borders without traveling or setting up shop in other countries. 33% of online shoppers made purchases from abroad in 2016, with Luxembourg, Russia, and Switzerland topping the list of cross-border online purchases (each over 60%).

What Are the Top Ecommerce Platforms in Europe?

Figuring out the actual market share of each leading platform is quite a challenging endeavor, since private corporate data and presumably inflated user counts throw a dense cloud of confusion throughout the ecommerce platform landscape. However, we know precisely what the most popular shopping cart / ecommerce platform solutions are across Europe. 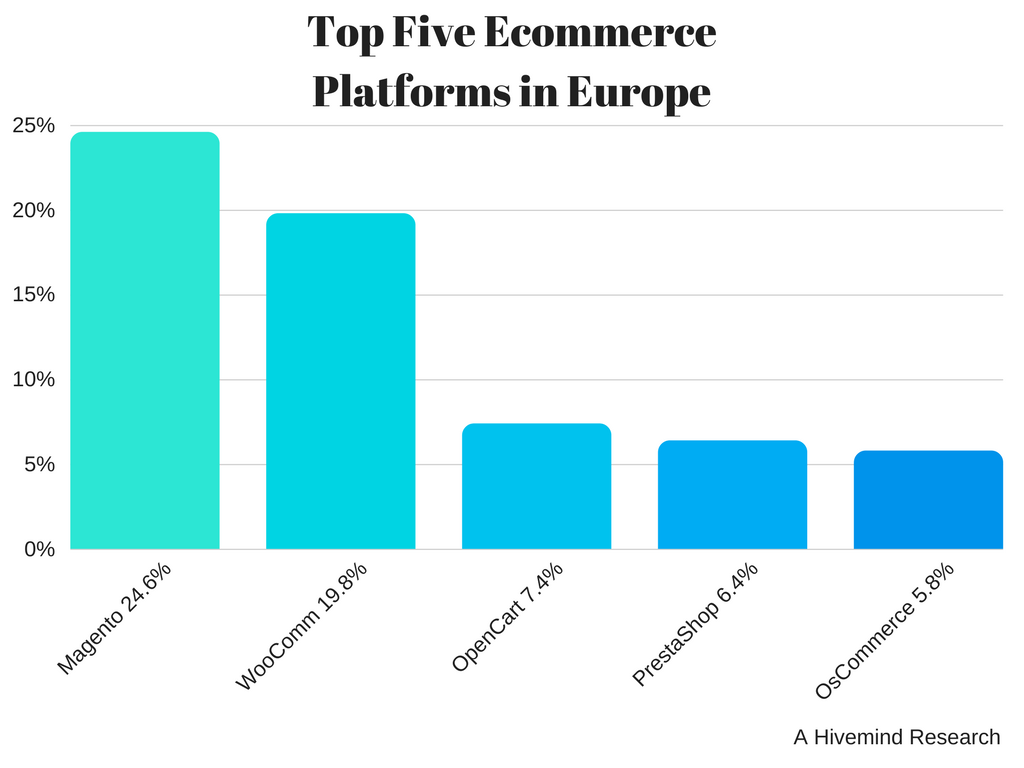 Zooming in even further on Europe, it becomes clear that the leaderboard varies across European countries. “If we look at a country breakdown of ecommerce technologies we can see that Magento dominates the majority of northern Europe, e.g., UK, Ireland, Netherlands, Germany, Denmark and Switzerland,” Hivemind states. “However, Prestashop has a stronger presence amongst the top one million sites hosted in Portugal, Spain, France, and Poland. Overall, the Prestashop platform has seen no growth overall and in fact has been demoted below OpenCart in terms of popularity.”

A CloudWays analysis of ecommerce platform market share in 2017 shows a different story in many European ecommerce markets. Here are three examples:

Zen Cart (17%) tops the list, followed by Wix (13.65%) and OpenCart at 12.28%. Magento (11%) and Shopify (10%) have also claimed a significant position in the United Kingdom. Here is a depiction of UK’s market share of ecommerce platforms, obtained through BuiltWith: 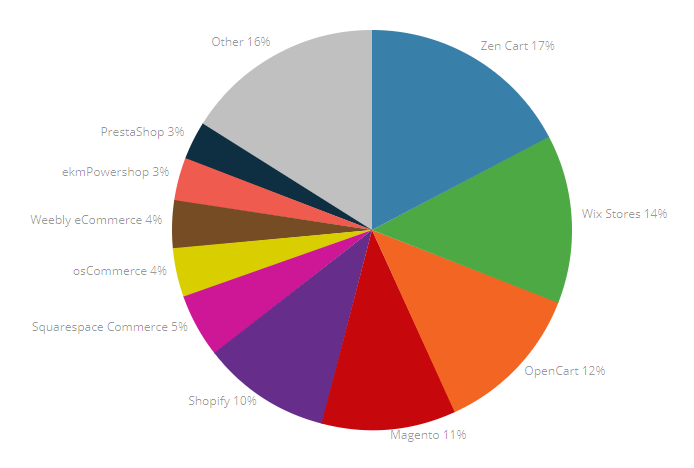 Gambio, a local shopping cart solution, has a market share of 12%. It is closely followed by Magento (12%), ePages (11%), Zen Cart (9%), and Shopware (8%). Here is the BuiltWith depiction of Germany's ecommerce platform market share: 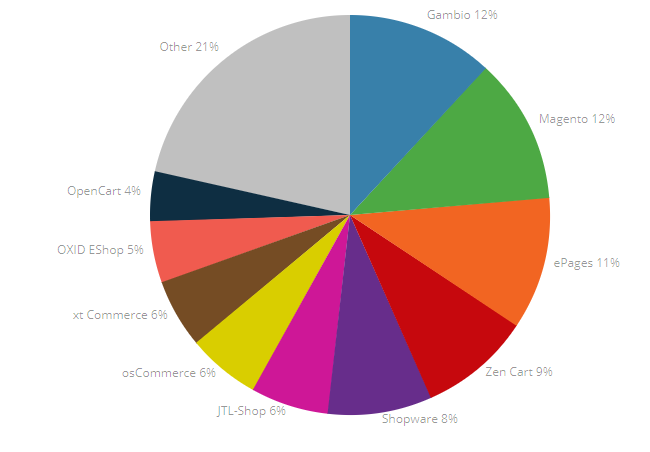 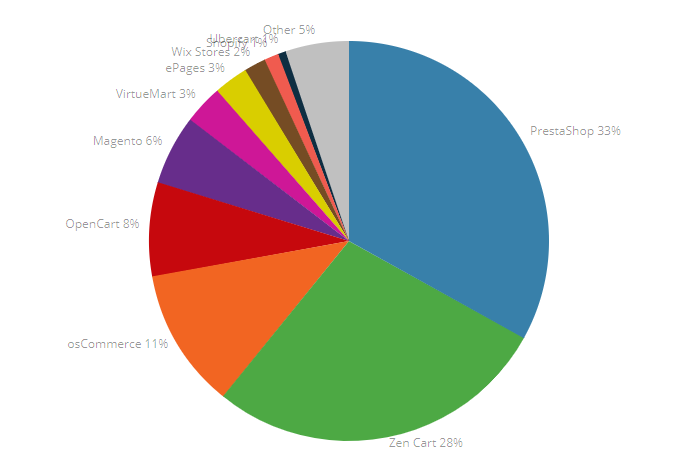 As a European financial institution and payment gateway, Twispay integrates beautifully with all of these platforms.

Find me on LinkedIn